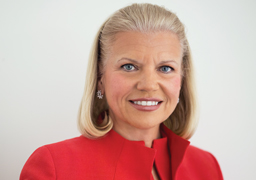 Ginni Rometty is Chairman, President and Chief Executive Officer of IBM.  Ms. Rometty was appointed to these positions effective January 1, 2012.

Ms. Rometty began her career with IBM in 1981 in Detroit, Michigan.  Since then she has held a series of leadership positions in IBM, most recently as Senior Vice President and Group Executive, IBM Sales, Marketing and Strategy.  As IBM’s global sales leader, she was accountable for revenue, profit, and client satisfaction in the 170 global markets in which IBM does business. She was responsible for IBM's worldwide results, which exceeded $99 billion in 2010, and for leading IBM’s global strategy, marketing and communications functions.  In this role, she established IBM’s Growth Markets organization, which is expected to contribute as much as 30 percent of IBM revenues by 2015.

Prior to this, Ms Rometty served as Senior Vice President, IBM Global Business Services, where she led the successful integration of PricewaterhouseCoopers Consulting.  This acquisition was the largest in professional services history, creating a global team of more than 100,000 business consultants and service experts.  In this role, Ms. Rometty also led the development of IBM Global Delivery Centers in China and India.  In recognition of her leadership, Ms. Rometty was honored with the Carl Sloane Award 2006, given by the Association of Management Consulting Firms.

Ms. Rometty is a leader in diversity initiatives including IBM’s Women in Technology Council and the Women's Leadership Council, and is one of the senior sponsors of the Women's Executive Council.  She is a frequent speaker at industry and business conferences, and has been named to Fortune magazine's “50 Most Powerful Women in Business” for seven consecutive years, including most recently in 2011.

Ms. Rometty serves on the Council on Foreign Relations; the Board of Trustees of Northwestern University; and the Board of Overseers and Board of Managers of Memorial Sloan-Kettering Cancer Center.

She holds a Bachelor of Science degree with high honors in computer science and electrical engineering from Northwestern University.